Jock of the Bushveld 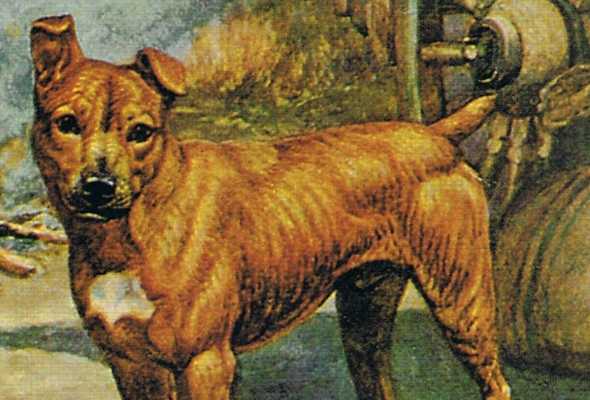 Jock’s mother Jess was the only dog in their camp. FitzPatrick describes her as “an unattractive bull-terrier with a dull brindled coat–black and grey in shadowy stripes. She had small cross-looking eyes and uncertain always-moving ears; she was bad tempered and most unsociable”, but everybody respected her.[3] Jock’s father is only described as an imported dog in the book and there’s an ongoing debate on whether he was an American Staffordshire Terrier or of a breed like the Bull and Terrier.

FitzPatrick describes the puppies: “Five of the litter were fat strong yellow chaps with dark muzzles—like their father. The sixth one was about half the size of the others. He wasn’t yellow like the others, nor dark brindled like Jess, but a sort of dirty pale half-and-half colour with dark faint wavy lines all over him; and he had a dark little muzzle.”[3][4] Since the runt had not been spoken for, Percy slowly came upon the idea of taking him on as his own. He called him Jock and it seemed as if the puppy knew that FitzPatrick was his master from day one. He even followed him home without any coaching.

This was the start of many a great adventure. The odd little puppy grew into a great and fearless dog. He was well liked, well respected and well behaved. He lived out his life at Percy’s side with unwavering loyalty and his loving memory inspired many a bedtime story to Percy’s three children. However, it was only when FitzPatrick had made his fortune, settled down to have a family and become an established and well-respected member of society that he took pen to paper at the urging of his children and shared these delightful tales with the rest of the world.

FitzPatrick gave Jock to a friend until he had a safer place for him to live in the town, where with his deafness, he was unsafe from traffic and people. The friend, Ted, loaned Jock to a store-owner Tom Barnett, who was having trouble with thieves and kraal dogs.

Jock permanently lost his hearing when a kudu antelope cow kicked him.[3] This is attributed as one of the main reasons he died, as he could not hear Tom Barnett when he called him, and was mistakenly shot, because he was thought to be the dog killing chickens on the farm (when Jock had meanwhile already killed the other intruding dog)